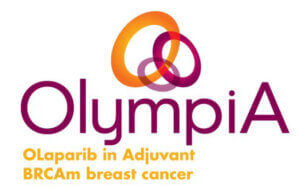 A randomised, double-blind, parallel group, placebo-controlled multi-centre phase III study to assess the efficacy and safety of olaparib versus placebo as adjuvant treatment in patients with germline BRCA1/2 mutations and high-risk HER2-negative primary breast cancer who have completed definitive local treatment and neoadjuvant or adjuvant chemotherapy

OlympiA was set up to assess if a new treatment using a drug called olaparib can reduce the risk of breast cancer recurrence in patients with high-risk HER2-negative primary breast cancer who have an inherited BRCA1 or BRCA2 gene mutation and who have completed all standard anticancer treatments.

Olaparib aims to block the repair of DNA which can cause BRCA-associated cancer cells to die.

Several previous studies have already shown that the use of the drug olaparib improves the chance of disease-free survival of patients with inherited BRCA1 or BRCA2 mutations who have advanced cancers. Other studies have shown that olaparib significantly reduces the risk of progression in patients with recurrent ovarian cancer.

Results of this analysis were presented during the plenary session of the 2021 American Society of Clinical Oncology (ASCO) Annual Meeting. They were also simultaneously published in The New England Journal of Medicine.

The results of the planned second interim analysis of overall survival (OS), a key secondary endpoint on the OlympiA trial, showed that one year of post-surgery olaparib relative to placebo led to a statistically significant and clinically meaningful improvement in the OS, reducing risk of death by 32%.

At this second interim analysis, the previously reported improvements in IDFS and DDFS were maintained with similar benefits. The safety and tolerability profile of olaparib in this trial remains in line with what has been observed in prior clinical trials.

Based on the results of OlympiA, the drug olaparib was approved in March 2022 by the U.S. Food and Drug Administration for the adjuvant treatment of patients with BRCA-mutated HER2-negative high-risk early breast cancer who have already been treated with chemotherapy either before or after surgery. This approval will change the way U.S.-patients with this type of cancer will be treated in the future, and the expectation is that approvals will soon follow in other parts of the world.

Patients enrolled in OlympiA were randomly assigned to one of the following treatment groups and received treatment for up to 12 months:

All randomised patients will have clinical assessment visits for 10 years following their randomisation into the study. Once a patient completes 10 years of clinical assessment, she/he will enter the survival follow-up phase of the trial which will continue until 10 years after the last patient is randomised.

During the trial, DNA samples (blood and tumour tissue) were collected from all participating patients and stored in the study biorepository for future research into genes/genetic variation.

Patients who have been diagnosed with high-risk HER2-negative primary breast cancer, who carry BRCA1 or BRCA2 mutations in their genes, and who have completed definitive local treatment, and pre- or post-surgery chemotherapy.

A total of 1,836 patients have been enrolled in the study.

Over 600 hospitals activated in 23 countries around the globe.

The study is funded by AstraZeneca. The study sponsors are NRG Oncology (US) and AstraZeneca (rest of the world).

The study is run according to BIG’s Principles of Research Conduct.

TRANS-BIG TRANSBIG was an EU-funded consortium coordinated by the Breast International Group to promote collaboration in translational breast cancer research. Share this trial What TRANSBIG