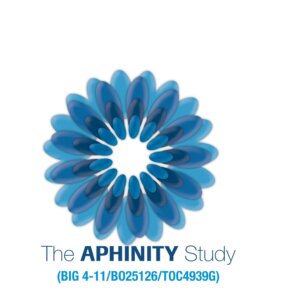 APHINITY has been testing whether adding a drug called pertuzumab to the standard adjuvant treatment (trastuzumab and chemotherapy) in patients with operable HER2-positive (HER+) primary breast cancer improves the outcome of patients with the disease.

The first results of the APHINITY trial therefore showed a modest benefit from adding pertuzumab to trastuzumab, in itself an important step in advancing cancer care for patients – especially for women with the highest risk – those with node-positive and hormone-receptor negative breast cancer.

The updated results, presented at the San Antonio Breast Cancer Symposium 2019 and published in the Journal of Clinical Oncology in 2021, showed that, after six years of follow-up, the greatest benefit remained in patients at high risk of recurrence, such as those with lymph node-positive disease, but regardless of hormone receptor status. Although fewer deaths were seen among the patients who received treatment with pertuzumab, the data are still immature and have not shown definitive improvement in overall survival, which will be reviewed again at a next interim analysis.

The patients were treated for one year. The study will compare results between the two treatments, looking at the invasive disease free survival, overall survival, and safety.

During the trial, samples (blood and tumour tissue) have been collected from all participating patients and stored in the study biorepository for future research.

This will help us identify biomarkers, which can help to:
– predict response or toxicity (side effects) of the dual anti-HER treatment
– better understand the biology of HER2+ tumours
– develop and validate diagnostic tests

Patients aged 18 and older, with known hormone receptor status (estrogen receptor [ER] and progesterone receptor [PgR]), and confirmed HER2+ breast cancer. This means that the cells have been tested positive for a protein called HER2.
A total of 4,805 patients were recruited.

This study is conducted by BIG Headquarters, in collaboration with the Institut Jules Bordet – Clinical Trials Support Unit (IJB/CTSU) and Frontier Science Scotland (FSS), which serve respectively as independent data and statistical centres.

24 research groups from the BIG network are participating in this trial.

The trial is being conducted in 42 countries, with a total of 563 hospitals worldwide.
290 of the participating hospitals are affiliated with the 24 participating BIG groups.

The trial is fully funded by Roche (sponsor). It was designed and conducted following BIG’s Principles of Research Conduct.

Get updates and learn more about our research

TRANS-BIG TRANSBIG was an EU-funded consortium coordinated by the Breast International Group to promote collaboration in translational breast cancer research. Share this trial What TRANSBIG